"No Tiger Fear"; A Review of Stoessi's Heroes Miniatures 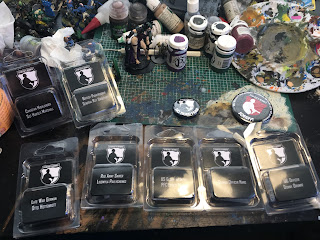 So a while back I posted on Stoessi's Heros Faceboook page about how much I would love to review his models, but I had no money to purchase them. Wonderfully, Thomas Stoesser got in touch with me and we arranged for me to get three models to review for free! But since shipping was an issue I decided to order four models, and then shipping wouldn't be an issue. Due to my incredibly clever idea, I was able to pick up the whole line! Even though Stoessi has been so lovely to deal with, I am going to be honest in this review. It wouldn't be a good review then, would it? Anyways, let's talk miniatures.

So, Stoessi's models are wonderfully detailed and very characterful. Which complies with his motto, or catchphrase, "Adding Character to Your Battlefield".

I already liked the models, but finally to see them in person has been great. They sculpts are very nice and I hope my painting skills can bring them to life. The models were very easy to clean up with very minimal mold lines.

Probably my favorite model is "Donny Dumpf". Being an American I think that this model is absolutely hilarious. I can now proclaim while using this model, "MAKE WAR GREAT AGAIN! Back to the way things were in 1918!"

Stoessi's first model(?) was "Otto Hottenrott", a German Late-War Schütze. I would have liked him to have more field gear than just a bread bag and canteen, but that was an easy fix with adding spare parts to flesh out the model.

I'm not going to go in to what I think of all the models here, but they are all wonderful. My full thoughts on them will be during the Step-by-Step articles which I will be writing.

I also got a button that says "No Tiger Fear", and a Bottle Opener that says "We don't have the proper facilities to take you all prisoner. Sorry!"

My only true complaint with the models are the incredibly thick tabs that the models come on. I use flat bases like those that come with Warlord Games' kits. After a while of trying to figure out how to remove the models without damaging them, I decided on simply shaving the tabs down.  It's a bit tedious, but it doesn't end up bending the feet. This isn't a comment on the models themselves but it made prepping the models a bit more difficult.

I did accidently snap the rifle stock on "Red Army Sniper, Liudmyla Pavlychenko", during this process, but I just had to reattach it with some glue.

My rating of these would be 4.5 Star General. (For those unaware the highest general is a Five Star General)

.
Posted by Enkelli Arn Robertson at 17:30 No comments: