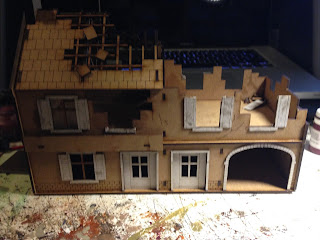 So I've picked up a few MDF buildings from Sarissa Precision and 4Ground. Now some of them don't come painted. Now I could have just painted them quickly and been done with them, but I've decided to actually spend some hobby time in making my buildings look nice. Also I wanted to share my methods. So, here we go. 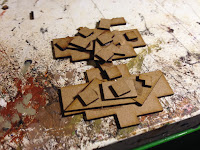 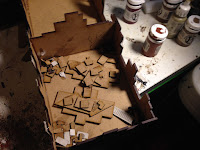 For this Tutorial I will be using Sarissa Precision "Large Farmhouse - Destroyed" which you can find here. So This being a destroyed building, there is clearly a large chunk of it that has been exploded. And I thought that the empty top floor didn't look right, and I wanted to come up with a way to have rubble, but not so that it would disrupt miniature placement.

Step One
So I came up with a neat little idea to have removable rubble. I took some spare MDF parts from the sprues and found a piece that would allow for an interesting pattern in the building. I glued the bits from the windows and built them up as a base for the kitty litter. 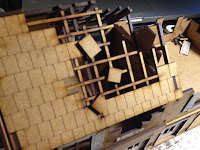 I also arranged some rubble in the corners. just to sell the illusion. a bit more.  I also added some spare parts to the roof as broken shingles


Step Two
I then added sand and kitty litter around in the corners; which I forgot to take a picture of. Sorry. 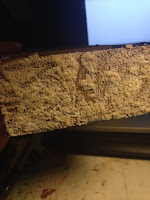 Step Three
Now before you start painting, you'll want to add the stucco onto the side. I left the cracks visible but you don't have to.

Step Four
Prime in what ever colour you want. I used black.

Posted by Enkelli Arn Robertson at 14:12 No comments: