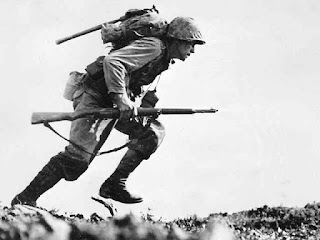 Most of the Wargamers I know are notorious for homebrewing* and modifying rulesets. As much as I love the Bolt Action Ruleset, one of the things I dislike about the rules is how Close Quarters/Assaulting works.

After a few games with the local group, we had a few things to say about the rules (not including the lack of grenades). Out of the discussions the biggest topic was how Close Quarters worked. As written they seem out of place considering how the Order Dice Activation System, that makes Bolt Action unique, effects gameplay.

For those of you unfamiliar with Bolt Action's Activation system; Each unit has an Order Dice, all of which are put into a bag or cup and drawn individually. This adds a level of unpredictability to the game which is common in real-life combat. To quote Helmuth von Moltke, "No plan survives contact with the enemy."

Now the Close Quarters rules don't seem to reflect this. They have one side attack and deal casualties, and then the other side goes. This seems silly to me. In what situation would a soldier just let himself get bayonetted? The answer is, under no situation would that happen.

So we decided that combat should be simultaneous.

Modified Close Quarters Rules:
1. Declare target
2. Target reacts
3. Measure move distance and move assaulting models
4. Fight first round of close quarters
a. Both sides tally up the dice to be used in the combat
b. Each player rolls their dice pool at the same time.
c. Each side inflicts Casualties.
d. Remove the appropriate dice from the pool
i. If one or both sides loose more than half of their unit, roll morale check per base rules.
e. Continue until one side is wiped out.
5. Winner regroups

I find that this allows for the possibility of either squad to come out on top and again adds chaos into the game.


* Homebrew (v.)- refers to a group/players making or 'brewing' his or her unique set of rules. The term 'Homebrew' can describe anything from customizing an existing commercial product (by adding or changing a few minor rules), to creating an entire standalone system.

Posted by Enkelli Arn Robertson at 20:06 No comments:

So I'm not a huge fan of using markers on a table. I use glass beads for pin markers, but that's really it. So I decided to make Mortar and Artillery strike markers to use on the table that blend in to the scenery.  So I thought I would share my process.

I had some old Warmachine/Hordes bases sitting around, the Warjacks have fallen off so they were pretty useless for basing support weapons for Bolt Action. So I decided to use them to build my Artillery markers. I found out that when you spray paint stuffing it stiffens the material. I use the same method to make destroyed tank markers. 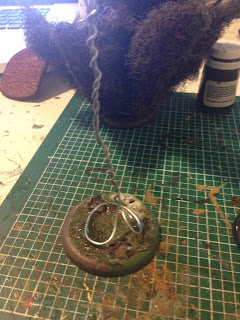 Step 1:
Take a length of wire and fold it in half begin to twist it around itself. make sure you leave a loop at the bottom. This will be what you glue to the base. Bend the wire so that you have a base and then glue it to your base. I then glued about 75 cents onto the base to give it some weight.

Step 2:
Add armatures to the central wire by additional strands around the central bit (technical turn) and glue those in place. I used 4-5 additional arms, but you could do as many as you want. 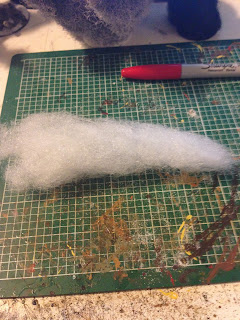 Step 3:
Take your stuffing and roll it into a cylindrical shape. 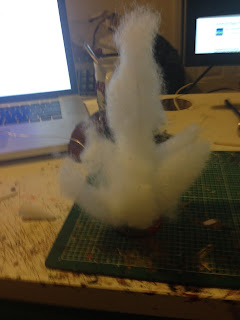 Step 4:  Coat the wires with your favorite brand of white glue or PVA; I use
Modge Podge, and dress the wires with the stuffing. You could also use super glue if you're impatient like me. but you will have stuffing fiber get stuck to your hands.

Optional: Spray it down with Hair Spray. 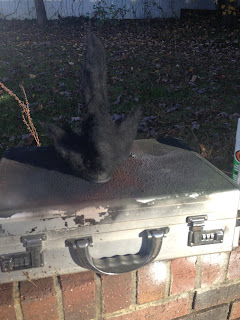 Step 5:
Take your marker outside or to your spray station, and spray paint it black. I used a generic brand from Wally-World. Make sure you get all of it painted, so you don't get a grey look. 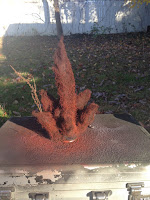 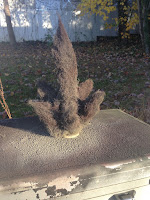 
Step 7:
Coat it in clear sealant, which stiffens the material further. 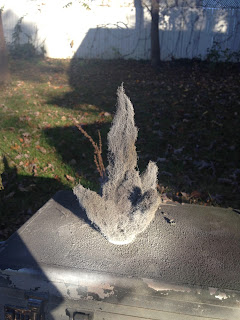 Step 8 (Optional)
You can take White Spray Paint to make it look snowy. You could also switch up the other colours for different terrain types.

You might not want to make them as large as mine, the taller one is about 11 inches tall.

This whole thing took me like 10 minutes to make the frame work and glue the stuffing and like 10 minutes to paint them. You could also use clump foam if you wanted too. I also have scaled it down to make Mortar Strike markers, taking care to leave a space for a d6 on the base, for zeroing in.

This weekend I attended a local convention, Scarefest AVL. It was put on by the local Pathfinder Society Lodge, and I was the only Wargaming Event. I played the first two turns as the Russian Commander, and then turned the reigns over to another player so the report becomes more detailed.
There were about 2000 points on each side and each side had a Weird War Unit. 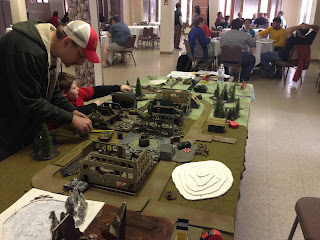 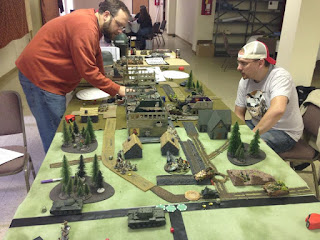 A Russian T-34 "Soturi" advanced up a road and took a pot shot from around a building at the command StuG 121 "Anna". The shot impacted the StuG's Schüzen but the crew's superior training kept them active! 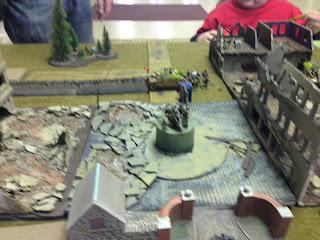 A squad of Heer Grenadiers advanced and took control of the Crashed Foo Fighter (Objective) while Srgt. Chekov's Guard squad advanced towards the restaurant his family used to operate from before the war. They froze as StuG 122 "Tanja" appeared on the far side. Tanja took a shot with it's cannon and MG. Shrapnel and lead tore through the ruins and inflicting a few casualties to the Russians.

Mortars reigned down on both snipers positions, forcing them to scramble for cover! The Russian General calls for the KV-1 to advance to support the infantry, but the transmission was scrambled!

The Commander of T-34 Soturi spots StuG Tanja and arks a shot over StuG Anna. StuG Tanja's schürzen does nothing to stop the round tearing through the hull and knocking it out!
Panzer IV Ausf. A 321 advances through the ruins and fires an HE shell through the restaurant windows, obliterating Srgt. Chekov's Squad. Srgt Chekov miraculously survives!
A German panzerfaust team advances towards Soturi and the round destroys the tank's track.

Turn Three
T-34 #2 advanced through a forest and fired a shot at Halftrack 131 which promptly caught on fire. But the crew quickly got the fire out and were able to continue. Srgt Chekov meanwhile captured the German Spy.

"Let's get the monkey in play!" The Russian commander brings on his genetically modified ape!
Pnzer 321 fires at a squad in the courtyard but the shell sails harmlessly over head. The Russian commander's transmission finally got through and the giant KV-1 appears on the table! And advances up a road to flank the German push towards the objective but is hammered by four Panzerfausts from the nearby church!
"UFO Rave Party" The Conscript squad assaults the German position at the Foo Fighter, but the German Squad prevails, but due to casualties they retreat off the table to a safer position.

The German Armoured car advances on a Russian squad across the frozen lake. The squad attempts to activate but gets confused and fires on the mortar team spotter. FUBAR!

Turn Four:
Otto takes a shot at Sgt. Chekov, but again Sgt. Chekov evades death! He promptly withdraws and passes off the objective to a nearby squad. Another tank shell flies towards Chekov and he refuses to meet the Grim Reaper! T-34 #2 finally takes out the Hanomag as StuG 123 "Freyja" takes a shot at the Ape, killing it's handler  "Tank beats monkey" 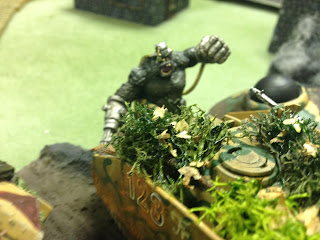 Furious the ape charges Freyja and proceeds to pound it's fists on the top, trying to get to the crew inside! The Wulfen SS Finally draws blood tearing into a Russian Squad! 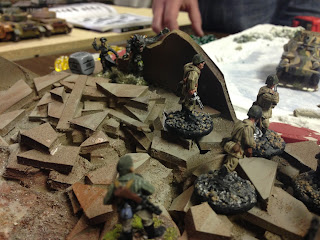 Turn Five:
The Russians get the objective off the table on the fourth dice and Chekov takes another barrage of bullets and shrapnel and still survives!

Welcome to the Trench Monkeys Blog!

This blog is for my ramblings and writing about Wargaming!